The beautiful lionfishes that float effortlessly on splayed fins in Pacific waters have never been such welcome visitors to the Caribbean since they were first sighted off Florida in 1985. In the 30 years since, they have spread on the ocean currents out to the Bahamas bank all the way south to the coast of Venezuela & Colombia, and circulated back up the Meso-American barrier reef. They are voracious predators that breed fast and eat anything, and have had profound impacts on Caribbean reef fish communities.

As with so many animal invasions on land or in the water, we are left with very few ways of dealing with these alien species once they have gained a foothold. Lionfish are no different, and despite intense scientific effort invested in trying to control the invasion, it all comes down to spearfishing them and try to convince people to eat them (which despite them being delicious, is surprisingly difficult!). The high costs of removing lionfish manually in this way, and monitoring how useful this is over time, puts immense pressure on the already stretched budgets of small island nations in the Caribbean, such as the Turks & Caicos Islands (TCI) – the site for our study.

In recognition of these issues, we set out to see if we could make this process more efficient in two ways: by improving how we might find more lionfish, and by improving how we more accurately monitor the result of removing them. If successful, governments could get “more fish for their buck” by targeting removals at densely populated habitats, and adapting future efforts based upon changes in density, thereby decreasing the detrimental effects of lionfish on the reef fish communities they inhabit. 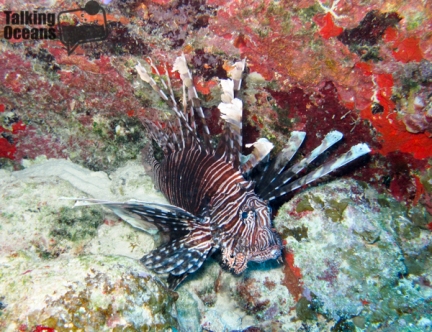 In our paper published this week in the journal Aquatic Conservation: Marine and Freshwater Ecosystems, we illustrate how we tried out a tool traditionally reserved for terrestrial biologists called “distance sampling”, to compare the “spotability” and density of lionfish at different depths and locations along a fringing reef.

It turns out that lionfish get bigger and more abundant as you go deeper on the reef, but as you might expect they get harder to see (as reef complexity is higher and they are really good at hiding). So if fishers dive deeper they’ll find bigger and more abundant fish, but will have to look harder (while desperately holding their breath!); a frustrating trade-off. However, by combining all survey results we found a happy middle ground, where fishers can maximize the number and size of fish speared, while minimizing the effects of decreased visibility. In the TCI (South Caicos Island – to be precise), this happens to be ~15m depth, which bodes well for the efficacy of scuba divers adding to lionfish removal efforts also! 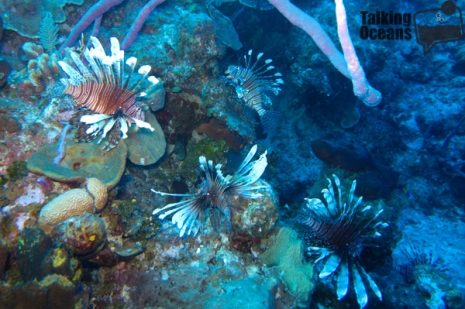 A nice trick of knowing the density of lionfish in a set area such as 1 km2, is that we can evaluate how bad the lionfish situation is compared to elsewhere. It turns out that South Caicos, with ~1650 fish per km2, is still at a relatively early stage of invasion especially when compared to some of the hardest hit areas such as the Bahamas, with other studies suggesting anything between 10,000 to 40,000 lionfish per km2!!

Lionfish tend to cluster together, and like to refuge in overhangs and holes when they are not hunting, meaning that where you find one, you find a few. Enhancing fishers’ ability to catch more fish is not something environmental managers normally concern themselves with, but in the case of lionfish, their removal benefits everyone – even end-chain consumers as they can either reap the benefits of eating large tasty lionfish fillets, or, other reef fish that come from healthy systems devoid of lionfish!!